Fife is rife with ruins, green fields and contradiction. Its dramatic entrance hall, the Forth Bridge, somehow encapsulates much of its inner nature, except perhaps for the matter of golf.

The entrance to Fife is a panorama of ports, water, hills and light from a late-Victorian railway bridge 1.6 miles in length, an iconic engineering masterpiece of red-rust girders, towers, cantilever arms, granite piers and 6.5 million rivets.

Look down and the train glides a hundred and fifty feet above the Forth river, swooping over the Queensferry villages with their tiny lanes, harbours and landing walls sinking beneath the dark still waters. Inchgarvie Island passes below, one of the Forth’s islands of defence fortification since the Middle Ages, last used in World War II and its concrete pillboxes now abandoned and open to the birds.

Look out and you see a cruise ship re-fuelling at one of Hound Point’s sea island berths, the road bridge and the Rosyth docks, pipelines and re-development.

Look up and pastoral fields roll down to entwine with industrial function and decay on either bank. On this day beams of sunshine strobe in the eye as the red rust girders flash past the window, on other days rain clouds roll through the estuary or sea fog blurs ship and seascape in a way that would have Turner in open-armed ecstasy.

Every crossing of the Forth is different with its unique interplay of shadow and light, weather and mood. This is a crossing that, like London’s Westminster Bridge in the shadow of Parliament, demands respect and attention. It can’t be ignored. The commuters reading their papers unaware of the Forth drama of industry, landscape and weather, or nymphs playing in the sun on Old Father Thames in front of the nation’s cockpit, need to be woken up and wacked to death with their own folded-up newspaper.

By the time the Forth Bride was finished in 1890 it had cost the lives of nearly 100 workers and hundreds more suffered serious accidents. They died working in the foundations 90 ft below sea level, were crushed to death by falling objects or they simply fell and disappeared into the waters far below. Boats positioned under the working areas saved at least eight men from drowning. 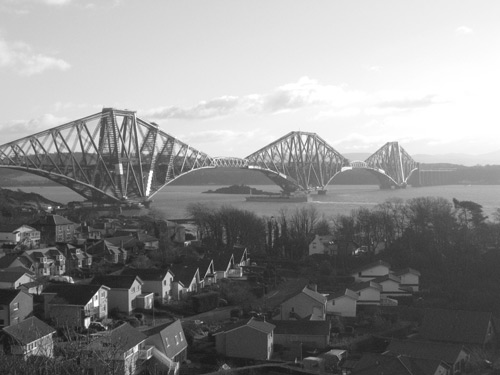 View from North Queensferry looking at the Forth Bridge

Heading north the moment the train hits land you are in Fife, those mysterious brown hills seen across the river from Edinburgh’s viewpoints.

For a while the train frames a rolling view of towns and industrial ruins. Rotting boats in abandoned docks tremble to the swell of greasy waters. Warehouses collapse into large mounds of rubble, metal and rubbish. Towns and grey houses, scrapyards and derelict mills, ruined castles and gloomy cemeteries, beaches with the remains of old concrete fortifications and the occasional seal basking on the rocks.

And flashing behind all of this, darting in and out of view are wide moody skies, mud and waters of the Forth. Far away on the other side is the port of Leith, the old trawler harbour of Granton, Edinburgh and the distinct tiny outline of Arthur’s Seat.

A thread of silver light tautly glitters between sea and sky. Sun shafts burst through clouds and scatter sparkling pools of light over the sea, silhouetting ships as dark etchings on the horizon. 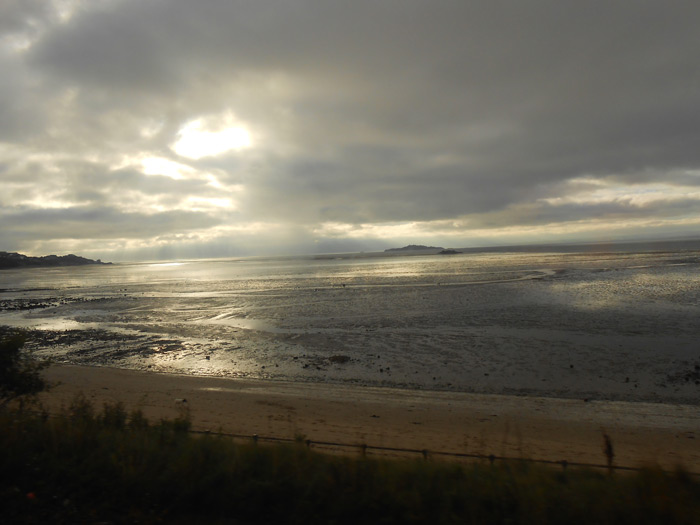 View from a train: Early morning over Firth of Forth

Once the train swings away from the coastline pastoral Fife displaces its industrial cousin. Now the view from the window is rolling farmland, horses grazing in the fields and lush woods. Even in the pastoral, deep in the woods, there are old works and mines. There are the remains of old mining processes if you can read the signs of mounds and depressions too regular to be formed by nature.

This is a journey that crackles with emotional resonance, a pilgrimage to family heartlands. Where my father, an old Westminster gentleman was returned home to his Scottish roots to be buried in a small church hidden deep in the Fife countryside. There is a ruined priory where he and other cousins spent part of their childhood and the limestone mills, now virtually abandoned but once a thriving source of income.

But first walking down a lonely country road with the inevitable mix of woods, hidden quarries and wild raspberries to pick a group of buildings catch my eye, buildings that I have seen many times before but never properly explored.

I hop over the fence and walk across the field of crop stubble to have a look.

Part 2 coming soon: poking round a ruined priory and a church.

Haar (coastal sea fog) over the Forth

Great urban exploration and photography of Forth Bridge from Sleepy City

11 thoughts on “The drama of the Forth Railway Bridge”