The modern-day flaneur can now walk and explore the city of the age of leisure and the mega-sporting event, Glasgow and the Commonwealth Games being the latest example.

The flaneur is a 19th century French figure, the street stroller investigating the imagination of the city, holding a mirror to the crowd, at the centre of it yet hidden. The flaneur was often a political creature, reacting to the economic and social changes of industrialisation and interpreting a new urban and consumer environment. Walter Benjamin described the flaneur as the “the investigator of the city grappling with consumer capitalism.”

Glasgow is dressed in her finest, scrubbed and cleaned for the visitors by a Council quite happy to neglect it when it won’t be on the telly. The Games has imposed an overlay on the city of colourful banners, straplines, bunting, signs and logos. It has also provided and encouraged unique opportunities for city drifting with ad campaigns, apps, map trails and green pavement stickers pointing the way to venues with estimates of walking times.

Ironically it is local Glaswegians who might be more confused as the Games have temporarily re-shaped the city topography and re-defined the street map. Favourite routes and strolls have been blocked by road and bridge closures, security gateways, the mushrooming of marquee tents, diversions and mile upon mile of barriers marking off zones only accessible by over-sized coded passes. Roads are pavements one day then a race track for speeding cyclists the next. The local stroller is discombobulated as they are diverted down unfamiliar roads and paths.

The 1860’s flaneur would have shaken his ivory cane in despair and frustration as Baron Hausmann eviscerated the old city and smashed his wide open boulevards into place. Here it would be churlish to be angry. It is mostly a temporary set-up, the crowds are friendly and happy and the rather wonderful volunteers cheerfully direct people with giant foam hands. There is traditional security in high-visibility jackets, volunteers in red and gray uniforms, groups of athletes in national team kit, streams of sports fans moving from one venue to the next. Attracted by the bright lights, the energy of the crowd and the sense of an occasion for feasting come the attending drunks, buskers and muttering madmen.

The sights and sounds of the Games are everywhere. The sun is scorching (for the first few days at least) and sporting, cultural and hospitality events are happening everywhere, from pop-up street corner to large stadia. Unusual spaces are reclaimed and then abandoned, art installations take-over empty shop fronts. Music drifts through the air and so does the heady scents from the flower boxes thoughtfully put out by the Council and no doubt abruptly whisked away as soon as the last guest and athlete has been cheerily waved-off from the departure lounge. Bursts of applause erupt from the bowling venue in Kelvingrove. That cheeky chappie Clyde stands about at points all over the city (he can be found with a trail map and handy app) delighting the children and slightly disturbing the adults with his crazed grin. The one where Clyde who hooks his thumb into his belt and thrust his groin slightly forward in the manner of the rent boys in Midnight Cowboy is especially amusing.

The atmosphere is undoubtedly buzzing and rather special. It is the fantasy Games that has come to life from the computer generated marketing images of happy people, families, colourful flags, murals  and shiny new venues. It is all basking in glorious sunshine, set against beautiful Victorian and modern architecture with everyone welcomed by Glaswegians anxious to showcase their city, their friendliness and humour, and above all not mess it up and convulse in agony with the Scottish Cringe. It is a similar emotional cycle experienced by Londoners and their Olympics. It starts “oh christ this is going to go wrong…please don’t make us look like idiots” to “I say…this is going rather well” and finally “we’re bloody brilliant, can we do this again?”. 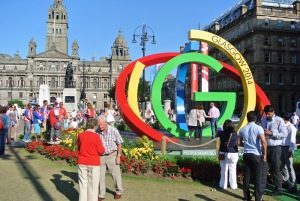 The Big G, athletes and the Glasgow City Chambers in George Square.

Sunday evening, a couple of days after the Opening Ceremony I follow the pavement stickers to Parkhead. The crowd and noise of the Merchant City festival quickly fall away as I head east up Gallowgate, an interesting area full of characters which is feeling decidedly rough tonight. The marks of the Games are here but like the outer reaches of an empire, its authority is weak. The natural order patiently lurks in the back streets, ready to reclaim its territory as soon as the Games have passed on. There is a ceaseless trickle of drunks and madmen trying to flag down passerbys and there are no volunteers or security to help. You are on your own, the best advice is to smile, laugh warmly at whatever is being incomprehensively muttered and above all keep moving.

The Games, like all large sporting events, nurtures its attending controversies and arguments and the East End is at the heart of it. There have been controversies over legacy, the impact of the Games on East End communities, Council dealings, forced evictions, the money trail and whether regeneration is actually just destruction and social cleansing. Away from the East End other controversies look at the homophobia in many of the member nations, and the issues of the imperial past.

On the other side of the road a group of men, menacing and drunk, laugh and cheer wildly as they urinate on the entrance to the notorious Bellgrove Hotel, the hostel for homeless and drug addicts who often only check-out feet first. It is a private-run facility profiteering from human misery and cited to illustrate the Council’s social housing policy in a political argument over the failed proposal to blow-up the council-owned Red Road flats as part of the Opening Ceremony. There is more convenient grass wasteland just around the corner but drunks know exactly what they are doing. They are not far up the social ladder themselves but at least they can mark their standing over the doomed wrecks inside.

Walking further up Gallowgate a pattern emerges of rough tattered pubs barely bothering to put a sign or name above the door with a small group of drinkers stand at the bar while someone unseen sings drunken sentimental karaoke.  They vie to be the worst pub in Scotland, like the scene in Trainspotting where an American couple accidentally wanders in to use the facilities and end-up assaulted and relieved of their wallet. Funnily enough the pub used for that scene is around the corner in Dalmarnock and has been spruced-up…for the Commonwealth athletes.

Gallowgate at least has life unlike the tumbleweed wastelands around Parkhead. The party has moved on from Parkhead which, like all stadiums when not in use, has an abandoned lonely feel and is still battered by the psychgeographic hit and run of the Opening Ceremony. Security hunker down in isolated, bleak and lonely outposts at the bottoms of the cliffs of the brooding hulking stadium. The athletics village and veldrome is only a stone’s throw away but these outposts somehow still seem beyond the protection of the armed police and snipers on the high rise blocks.

Midnight on the Clyde. An event has just finished and people are walking back to the centre or lingering around the BBC live zone having a drink and watching the big screen. The atmosphere is happy, satisfied and family friendly. The dark waters of the Clyde glow from the shifting colours of the Hydro and the SECC. Walking across the Squinty Bridge I spot crude crosses tied along the railings unnoticed by almost all crossers. On closer examination each cross bears the name of a British soldier killed in Afghanistan, how they died and where they died. The crosses disappear beyond the vanishing point.

The Games are declared a great success, partly because of the script but mostly because they have been. The crowds have enthusiastically cheered all the athletes, including the English ones. The character of the city and its people have been showcased, perhaps even the Games themselves have been rejuvenated in a way that managed to completely avoid saying the word empire. Glasgow will be left ravished and flustered, tidying up after an almighty party as attention moves to the next city and the next mega-event. British sporting attention will see off the cricket and shift to the new football season with its tribal hostilities and taunting jeers.

Flaneurs, sports fans and Glaswegians alike: many, but not all of us, will be saying that was bloody brilliant, and asking can we do this every year?

Further information
A different take on the controversies of the Commonwealth Games by A Thousand Flowers.

6 thoughts on “A flaneur, urban walking and the Commonwealth Games”