Unpeeling the layers of history in east Glasgow; a path of music and art; and a character who opened a massage parlour called Sheik-Ma-Tadger.

Barrowland Park, East Glasgow and I am walking along artist Jim Lambie’s Album Pathway, a path designed to represent the side view of a vinyl record collection kept on shelves at home. Two thousand colourful spines with the names and dates of the bands that have played in the nearby legendary Barrowlands since 1983.

Two women further up the path are, like me, slowly walking and reading the names at their feet. You wonder what some of these names like Public Enemy or Jermaine Jackson made of this area, some of whom played at the Barrowlands long before the recent gentrification, even before the wave of re-invention sparked by Glasgow becoming European Capital of Culture in 1990.

This is one of the most atmospheric areas in Glasgow – crumbling and evolving, rough and historic. It is an intersection channelling ancient history, football, music and Irish nationalism. Along with the Barrowlands there’s the nearby Barras market with its mix of antiques, criminality and flea market stalls where a young Jim Lambie flicked through thousands of records to find his music. It’s poised between old tattered Glasgow and the ongoing gentrification, greasy spoon cafes and trendy art galleries. Pockets of deep poverty and local dosshouses mix with market trading and digital businesses. Yet if you stand here and peel away the layers you will go back to the start of the city, a small burn chattering away through a wooded valley and a holy man preaching the word.

The women are lost in nostalgic memories triggered by the path of nights at the Barrowlands, lost friends, forgotten acquaintances, tales of drinking and ribaldry, and wandering back to town deafened by feedback. I chat to them for a while and then I ask:

‘You must remember the Schipka Pass that used to stand here? The old market?’

They looked at me blankly for a moment.

‘Oh…that place with all the crazy signs.’ The woman’s face brightened, pleased at remembering the place. ‘It burnt down didn’t it?’

Schipka Pass. Note the main sign with the promise We buy rubbish, we sell antiques.

She’s remembered it. The Schipka Pass.  It is better known as a mountain pass through the Balkan Mountains in Bulgaria, the scene of a battle fought between the Bulgarians, aided by Russian volunteers, and the Ottoman Empire in 1877-78. In Glasgow it lent its name to a small throughfare and a flea market. A ramshackled, building buckling under the weight of home-made, hand-painted signs and billboards commemorating obscure events in Scottish history, and the results of glorious and long-forgotten football matches. It was one man’s monument to Scotland and Partick Thistle, the third football club in Glasgow. Thistle’s colours were brandished in a red, black and yellow two-fingered riposte to the Old Firm green and blue. Thistle’s flag was boisterously planted in the crackling lines of Irish nationalism, the tricolour and the green leaf clover. For every Celtic fan walking from the city centre, and singing their way to Paradise, had to shuffle past and acknowledge the place, it could not be ignored. I loved the anarchic humour of the place, it winked welcome to Glasgow, things are a bit different here. At the time I never realised it was a working building.

Dick Barton ran the place. A wind-up merchant and Glasgow character who flits across the city’s online memory banks, fragments of ‘oh yes I remember Dick Barton. Didn’t he once…?’ He ran the market. He owned a pool hall on London Road. He ran a hairdressers and someone went out with one of his staff. He was a football obsessive sending in questions for the papers. He crops-up in black and white grainy photos, greeting, for example, a recently appointed and bemused Celtic manager.  ‘Welcome to Glasgow,’ says Dick. The look on the manager’s face suggests a dawning knowledge, this city is a madhouse.

He cons someone out of a deposit for a flat but the tenant laughs off the loss with a “he’s a character – what did you expect?” You should have been warned by the signs on his market. ‘We buy rubbish, we sell antiques’. Every line in a newspaper interview in 1998 is the pure gold of an eternal optimist.

“One of my few successful ventures was when I opened up the Sheik-Ma-Tadger executive massage parlour over the road in the Schipka Pass. The deal was that any customer drinking 25 pints in the Calton was entitled to a free session. Of course hardly anyone could drink that much but after about 15 pints they were in the mood for some jiggery-pokery so they would pay the admission anyway. The girls weren’t the best looking in the world but the punters all had their beer goggles on so they didn’t care. I hired all the girls from a local sausage factory so they didn’t need any training. I was making an absolute packet but it only lasted two weeks before I was grassed up and the cops raided the place.’

The rest of Dick’s business ventures have been disastrous.

“My worst scheme came after I spoke to Johnny Lorimar who had the idea to turn Bennetts nightclub into a gay club. He said that before then the place was empty and on the road out and now it’s raking it in. I decided to turn the downstairs part of my place into a lesbian only zone and called it the Lesbian Lions. I really thought it would do well and that blokes would come along to watch. But not one lesbian came in – and the rest of my punters refused to come in because they didn’t want to be seen in a gay joint.’

Scar-faced Dick has even changed the pub’s name several times in a bid to win a new clientele.

He said: “It’s been called Barton’s, Dirty Dick’s, and The Hanging Ball Pool Club but no matter the name it’s still the same idiots who come in.”

It’s not difficult to understand why the good lesbians of Glasgow didn’t come flocking to Dick’s Lesbian Lions bar. Then again, who knows if any of this is true or creative memory, or myth-spinning. It doesn’t matter.

Dick died in 2004 and the Schipka Pass stood as an unofficial shrine before a fire burnt down the adjacent buildings and the site was regenerated into the current New Barrowlands Park as part of the Commonwealth Games cultural programme. Before the regeneration Dick Barton’s son Gary was filmed here reeling off memories of the shops and markets, ice-cream parlours, tenements, pubs and record shops that slowly disappeared or were knocked-down over the years since the 1970s. A decline into semi-dereliction, a return to the open ground of wappenschaws.

‘I wonder what was here before the Pass?’ I ask the women.

They look at me blankly. We have moved out of living memory and into the dusty history of archives, old photos and maps. I leave them to their memories before I become a nuisance.

Before the Schipka Pass…and back to the Molendinar Burn

City of Tardis – Glasgow still has a few of the original iconic police boxes left. This one overlooks Barrowland Park

Before it was the Schipka Pass it was St Andrew’s Market and possibly dated as far as back as 1826, a time when there was a re-alignment of the Gallowgate and its associated hive of lanes and old closes. Before that, this area was open ground known as The Butts where wappenschaws were held, a Scottish word for a muster of men to show their commanders their weapons were in good order. It was also the site of two battles. The Battle of the Butts in 1544 was part of a power struggle over claims to the Scottish throne and with the Church. The Battle of Gallowgate took place in 1679.

The word Gallowgate is a misleading one. Glasgow was never a walled city and gate, or gait, is actually an old Scottish word for ‘’the way to’, in this case to Glasgow Cross, just a stone throw’s away and once the most important intersection in the early history of the city. The pass into the city from the east, a way for kings and queens, bishops and the jingling of John Graham of Claverhouse’s proud dragoons, the King’s troops proudly riding to an unexpected albeit temporary humiliation at the hands of Scottish Presbyterian movement, the Covenanters, in the Battle of Gallowgate.

I think of those kings and queens entering the city and being welcomed by Dick Barton’s ancestors, offering the services of a local wench whose dextrous skills have been honed by the day job in a sausage factory. And did those royals who passed through the Gallowgate have the same bemused expression as the Celtic manager? Could they really convince themselves they were anointed by God, a link between the celestial heavens and these irreverent, joshing fools who greeted them with a toothless grin and an “awright big man”? Dick was in their head now, asking dark questions during dark nights. The whisperer in the ear, Memento homo (remember you are (only) a man). 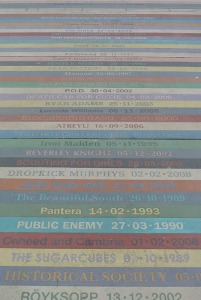 Standing at the site of the old Schipka Pass, standing on these albums spines and the memories of gigs, we can go back to where it all began. For underneath us a forgotten half-mythical burn threads its subterranean way through the sacred and historical heart of Glasgow. Once this was a beautiful wooded valley that bequeathed Glasgow its name, dear green place. It was a meeting of early Christians, saints, pagans and druids and the burn provided essential water for the mills and craft industries of early medieval Glasgow. Further upstream in in the 6th century the patron saint and founder of Glasgow, St Mungo built his church where the present medieval cathedral now stands.

The Molendinar Burn is buried, diverted and culverted deep down within the subconscious of the city. It is better known by engineers, architects, east Glaswegians of a certain age, devotees of cults to the arcane and forgotten and the odd tunneling urban explorer. Yet it is crucial to Glasgow’s history, the beginning where myth and practical needs shape a city’s first tentative steps.

New Barrowland Park is a temporary project leftover from the Commonwealth Games although there are voices to save it. It is on private land and there are plans develop it into the inevitable anonymous flats and retail. Another layer added to this spot, and perhaps the most dull reincarnation. Then again it might be a return to the snapshot memories of Gary Barton. A place of life, shops, music and markets. Which is, after all, what cities are about.

Molendinar Burn: In search of a lost burn

Schipka Pass: Gary Barton describes what existed before and thoughts on the future development.

Battle of the Gallowgate

8 thoughts on “Path of memories: we buy rubbish, we sell antiques”