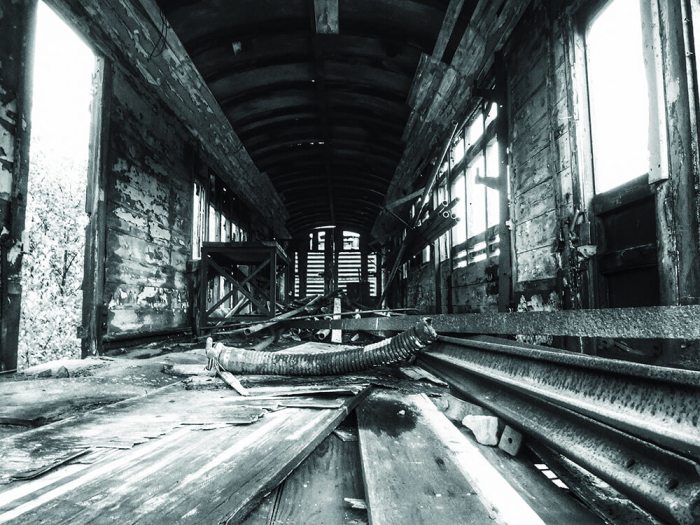 Inside an abandoned railway carriage

It rained the whole time we wandered amongst the rusting carcasses of old industrial railway stock.

The Lowther Hills, denuded and charmless, stood battered by squalls. With all the disused mines in the area it felt like Scotland’s idea of The Hills Have Eyes territory. 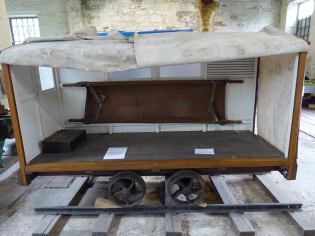 Now, it’s a living museum of industrial steam and diesel locomotives – known to generations of Scots as ‘Pugs’ – displayed in a similar environment to the one in which they spent their working lives.

Old photos of the large mining operation show the works looming over the small houses of the workers; great plumes of smoke belching and drifting over a landscape gouged and scoured by mining, railways and industry.

Little seems to remain now apart from a few abandoned, sturdy buildings and a scattering of railway wrecks across the site. The museum operates in a sprawling set of railway sheds. A couple of old chimneys still soar above us into the rain clouds but it’s a hollow victory, they’ve not smoked for years.

The museum features restored steam engines, ambulance vans, steam model railways and other paraphernalia. The division of labour seems traditional as well. Volunteers, all male, are eager to chat about the work and discuss all things railway. Their female counterparts seem to rule the café and the shop, the more social side of the enterprise. They serve slabs of homemade cake so hefty and cheap that I find myself urging them to charge me more. 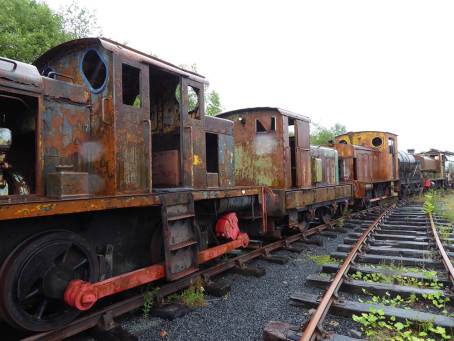 At the Scottish Industrial Railway Centre

It’s easy to wander in and out of the abandoned areas. An old building houses the rusting remains of a conveyor belt that once clattered through the chambers. Now it stands silent and ghostly. We walk amongst carriages, wagons, cranes and metal junk of unknown purpose. Young woodland restores the landscape and nature takes its revenge, slowly devouring what once devoured it.

We find a line of wagons and engines, marooned in vivid shades of orange and red rust, and peeling paint. Not wanting to upset our volunteer friends, we clambour discretely amongst the engines, ducking down when the little steam train whistles past us, giving rides to visitors along a section of restored track.

A couple of weeks later, Mrs C and I spend a weekend exploring Bronte countryside. We travelled to Howarth via the Keighley and Worth Valley Railway. It was a very different operation to the semi-abandoned, bootstrap railway heritage of Dalmellington. This was manicured heritage right down to the signs on the platforms and old noticeboards. There was a line of charming stations, soot and smoke pervading through the carriages, the plumes of smoke chuff-chuffing up above the trees, and the smart uniforms of the volunteer staff. Mrs C, as always dressed like she had stepped out from a 1940s film set, fitted right in.

It was pure Yorkshire rural nostalgia, a lovingly restored fantasy of an old world that ran parallel to the modern world. A world of rhubarb gin and chestnut brown bitters, tea and baking, wild moors where soaked writers roamed through storms and dreamed up dark stories in the shadow of ruined farmhouses. It couldn’t be more British if you tried.

But the two different visits left me wondering whether railway heritage is a peculiarly British obsession?

Is this the quirkiest town in Britain?

A lost world at Crewe Station