Forget the Old Firm. Glasgow’s Partick Thistle has given world football a wonderfully bizarre mascot and one of the funniest football quips ever. Welcome to the world of the Jags. 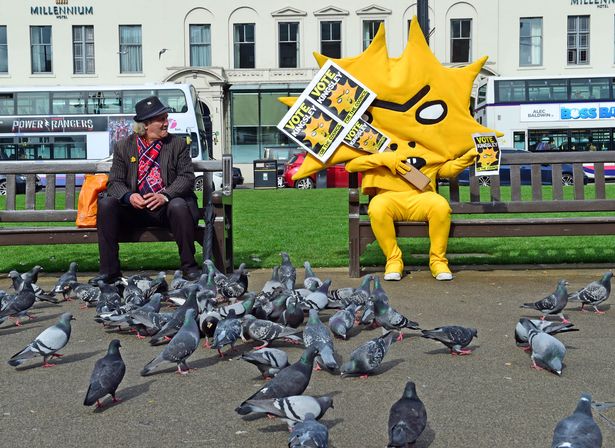 “And now we get to the really important questions in life,” said the waiter after he took our order in a back-street Naples cafe. “Celtic or Rangers?”

I hesitated. I knew what he wanted me to say. Naples and Glasgow share similar traits, two of them being a devotion to football and religion, but only one half of Glasgow is catholic.

“Partick Thistle,” I replied. “The Jags?”

“Eh?” He paused, looking confused. “Partick Thistle?” He wondered off, mystified and shaking his head. I don’t blame him although the next person who asked claimed he had heard of Thistle. Or he was just being polite.

Partick Thistle are one of Glasgow’s smaller clubs in a city famous for and dominated by the Old Firm, the deep rivalry between football giants Celtic (catholic, Irish nationalism, left-wing) and Rangers (protestant, unionist, conservative).

My Thistle supporting credentials are, admittedly, thin on the ground. Half the time I barely know who’s in the team or their league position yet I’ve been watching them on and off for the last 25 years or so. As a perfect example of a yo-yo club, I’ve seen promotion highs and relegation lows with friends who are fans.

One friend, the Glasgow Chronicler, was memorably described in The Scotsman as a cold 19th century tramp given a coat by Oscar Wilde. This misunderstanding arose when he was collecting items from Oscar Wilde’s grandson to raise funds for the ‘Save the Jags’ campaign in 1992 to help Thistle avoid financial oblivion. “It would be an outrage,” said Wilde’s grandson, “if Thistle didn’t survive.”

The Thistle fans consider themselves above all the Old Firm nonsense although their support is noticeably more vociferous when they are playing them. They are a mix all along the social spectrum but seem to have a disproportionate amount of hipsters, academics, students, artists, lefties, refugees from the bitter sectarian tribes of the Old Firm. They delight in a chant that tells both the Pope and the Queen exactly where they can go and sing a song about how you’ll only go to heaven if you wear a Thistle bonnet with Fuck the Old Firm on it. This seems to philosophically clash with their secular approach but football fans are not noted for their reason or logic. They were the first Scottish club to incorporate the LGBT Rainbow flag on their football strip.

When Thistle launched their new mascot, Kingsley,  it went viral round the world because no mascot had ever before looked like they had been born out of an acid trip encounter with a demented sun god. It was designed by artist David Shrigley and citics lauded it as representing football angst or “a fan yelling for its team”. At first launched to decidedly mixed reviews, Kingsley now seemed to be a commercial and popular success. Kingsley has recently appeared on a collage specially created by the excellent @Coldwar_Steve for an exhibition at the Scottish National Gallery of Modern Art.

Kingsley goes skateboarding in Kelvingrove. Kingsley goes racing with the other mascots. Kingsley chases after children in George Square. Whatever Kingsley does, it looks brilliantly demented and anarchic.

Humour is Thistle’s greatest weapon. The first time I went to see Partick Thistle I remember the friendliness of the fans, the banter, the chants and the one liners shouted from the crowd, sometimes directed at their own players.

When asked why he supported Thistle one fan said: “because it’s cheaper than going to an S&M dungeon and you go through the same emotions.” Billy Connolly, a Celtic fan, once said about Thistle: “For years I thought the club’s name was Partick Thistle Nil.” One fan suggested to the Thistle striker he could improve his movement if they all chipped in to buy him a mobility scooter.

Then there’s the madness of Dick Barton and his Shipka Pass – a ramshackled flea market buckling under the weight of home-made, hand-painted signs and billboards commemorating glorious and long-forgotten football matches. It was one man’s monument to Scotland and Partick Thistle. Dick was a wind-up merchant and Glasgow character who flits across the city’s online memory banks, spinning myths out of his disastrous schemes, including opening a massage parlour called Sheik-Ma-Tadger. (It’s worth reading more about Dick Barton from one of my early blog articles)

But undoubtedly the funniest football quip goes to Thistle’s legendary cigar-smoking, pigeon-loving, miracle-working, swearing madman manager John Lambie. When Lambie was told that Partick player Colin McGlashan was suffering from concussion and couldn’t remember who he was, Lambie ordered his assistant to “tell him he’s Pelé and get him back on”.

Sometimes the football is good, more often it’s rubbish. Sometimes the atmosphere at Firhill is electric, other times it’s more like an abandoned library. I remember once following Thistle to play Dumfries, a train journey through a beautiful snowbound winter wonderland. The train was crammed with drinking Thistle fans. Suddenly, at an unseen signal, they burst into loud song, going through their entire non-PC songbook, no doubt to the bemusement of the other long-suffering passengers. Wait until we get to the match, I thought to myself, the atmosphere will be great. In fact, it was strangely subdued compared to the exuberance of the train. After the match Thistle fans staggered back onto the train under the weight of crates of beer and a day’s drinking in the legs. It was too much. By the time we approached Glasgow, the train had lulled them all to sleep. Now it was quiet, bar the snoring of fans bedecked in red and yellow; passed out and slumped over tables or sliding down chairs onto a debris of cans and bottles.

If the football is rubbish, Thistle is losing and the crowd is one of it’s more flat moods there’s one last thing to enjoy at Firhill Stadium – the beautiful sunset and view over the West End of Glasgow. If that’s denied by the clouds, then it really is sitting on a cold seat on a concrete step, alone with yourself wondering if humiliation in that sex dungeon might be a better option. Shrigley knew exactly what he was doing with Kingsley.

One of my friends claims he wrote to Partick Thistle suggesting that kids should get in for free. Surprisingly, or a coincidence to a discussion already taking place, they agreed and Firhill has a youthful, community vibrancy on match days with kids running about having a great time. It’s a clever way of securing the next generation’s support and I don’t know why more clubs don’t do it. My friend also has a son playing in the youth academy, and the local school teams he coaches play in suspiciously similar colours to Thistle.

Up Maryhill Road, past the Macintosh church and into one of Glasgow’s stranger areas of housing estates, canals, edgelands, views and lost land. Firhill Stadium sits near the canal and the Firhill wilderness – a sanctuary for strange characters, fly-tip art and foraging. The canal offers a vantage point for dog walkers, pissheads and cyclists to come together and watch the football on the bit of the pitch they can see.

The Hoff is a Thistle fan

American actor David Hasselhoff supports Thistle because he says they are “a team for the people“. He was seduced by Thistle during a panto stint in Glasgow in 2015.. If it’s good enough for the Hoff…

And finally…how to wind-up a Jag