3d visualisation of Glasgow’s Bruce Plan by the BBC

Can a city make you sad and die young? Can a city destroy itself? How Glasgow’s unique mysterious curse was born from a city nearly lost.

Imagine you wake up one day to find out someone is seriously proposing to destroy your city.

The city you love and perhaps love to hate. Your city of inspiration and struggle. The streets and history you haunt and the sanctuaries you linger in. The city you dream of escaping, the city you yearn to return to. Its history erased. Communities dispersed. Social fabric shredded. It nearly happened to Glasgow.

In 1945, the Bruce Report was published and showed Glaswegians a dystopian alternative reality proposed for their city. The Report is nearly 75 years old but still shocks with its staggering plan to demolish Glasgow’s entire historical centre and start again with a modern city of straight streets, rectilinear blocks and motorways.

The exuberant Victorian architecture was to be destroyed for serried ranks of uniform blocks marooned amongst wastelands of grass and dead space. All the quirks, the carved stonework, the stained glass windows – all of this to be erased by a monotonous single plan of structured coherent zones for transport housing, commerce, and education.

Many historic and architecturally important Victorian, Art Deco and Georgian buildings would have been destroyed including Glasgow Central Station, Kelvingrove Art Gallery and Museum, the Glasgow School of Art, designed by the renowned architect Charles Rennie Mackintosh and the Glasgow City Chambers. (The recent destruction by fire of the Art School is still a sore point for lovers of Glaswegian art and architecture and is best left for the moment).

So why was the Bruce Plan proposed?

At the end of the war, Glasgow was in a sorry state. Its housing stock was dilapidated, its people living in over-crowded tenement slums and suffering from poverty and ill-health. The Glasgow Corporation charged its chief engineer Robert Bruce with a mission: renew the city.

Bruce wanted to create a healthy, modern city that served its people and gave them better living standards. Glasgow would be rebuilt along the lines of formal 1950s Le Corbusier-style architecture.

“While Bruce’s vision was clean, efficient, inspiring and spoke of the future, security and equality, the aesthetic of that was so uncompromising and stark,” said Dr Horsfall Turner. “It’s very difficult to imagine the multiple connected families, living cheek by jowl in the Glasgow tenements, suddenly being transposed to a very different kind of architectural regime.” (BBC – the Bruce Plan for Glasgow)

Post-World War Two there were two competing visions for Glasgow, both seen as laced with political undertones. One vision was the Bruce Report, the rival vision was the Clyde Valley Regional Plan that sought to promote decentralise and disperse the population to the countryside, towns and new towns. Some saw it as an attempt to reduce the power of the socialist Glaswegian authorities. The Glasgow Corporation, keen to preserve its status and fearful this would be diluted by a population exodus, instead backed Bruce, formally approving his scheme in 1947.

In the end, the authorities adopted a mix of visions both of which came to be recognised as disastrous for the city. Bruce’s proposals were mostly rejected because they were so radical and expensive. The council started encouraging workers and their families to move into new towns like East Kilbride and Cumbernauld. 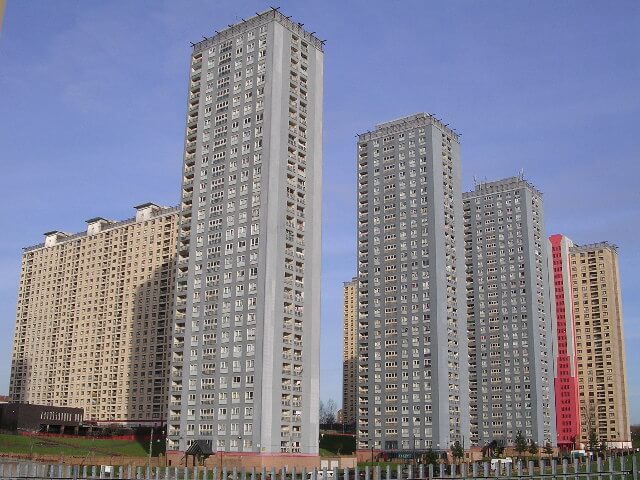 The legacy of the Bruce Plan

The Bruce Report influenced an intensive programme of regeneration in and around Glasgow from the mid-1950s to the late 1970s.

Slum housing was demolished and high-rise tower blocks were built within the city boundaries such as the infamous Red Road development. Even though the old tenements were considered slums, they were still close-knit communities who were broken up and scattered across the new schemes. The Anderston and Townhead districts give an insight of another Glasgow reborn under the Bruce Plan. They were levelled to make way for roads, high-rise housing and concrete office buildings. The M8 motorway is also another legacy of the Bruce Report.

Ultimately the ‘social engineering’ which underpinned the new housing schemes, is now widely seen as a failure. Many of the estates declined, developed huge social problems and have since been demolished. Meanwhile, what were once regarded as slum houses are now considered desirable tenements.

If you live in Glasgow your fate is to die young, a full seven years earlier than counterparts in other UK cities. Why? With everything accounted for, from deprivation to obesity, it was a mystery. It was a curse of the city. It was the weather. It was the drinking or the unhealthy eating. It was “as if a malign vapour rises from the Clyde at night and settles in the lungs of sleeping Glaswegians”, as the Economist once memorably described it.

Research by the Glasgow Centre for Population Health has slowly uncovered the main reasons behind the Glasgow Effect: more poverty than previously understood and the unintentional consequences of housing policies in the post-war era. Relocating workers and families was described as “skimming the cream”, leaving behind a population distorted with the old, the poor and the almost unemployable which in turn affected the mortality figures and created a mystery. Meanwhile, breaking up communities and dumping people in high-rise tower blocks left Glasgow’s populations more vulnerable to the problems of mental illness, deindustrialisation and poverty.

Mr and Mrs M sit with their children in a room running with damp, with broken windows in the middle of winter Make Life Worth Living: Nick Hedges’ Photographs for Shelter, 1968-72

The Glasgow Effect showed how a people and a city can be haunted by its ghosts, dreams and curses, lurking at the margins of an urban conscious. For a long time Glaswegians thought they died young and you just had to get on with it.

The Bruce Report showed how a city conceals within its stones, the fictional and the fantastic, visions waiting to be born that can be nightmares. Yet lessons have been learnt. City planning is slowly learning to aim to make citizens healthier and happier, including in Glasgow. Cities will always exist in a permanent state of tension between old and new, gentrification and regeneration, community and individual, health and development, noise and silence, myths and reality.

There are the ghosts of what has been lost and what could have been built. It’s what makes them so humane and fascinating.

And Glasgow’s city centre, with its Victorian and art deco gems, mostly survived.

1945 illustration showing the Bruce Report proposals to rebuild the inner core of the city.

Comparing the slums of 1970s Glasgow to today’s buildings

The ‘Glasgow effect’ implies cities make us sad. Can the city prove the opposite

It also nearly happened to London: Concrete bungle: how public fury stopped the 1970s plan to turn London into a motorway