2020 started with death and trauma. Then there was a pandemic. So, clearly civil disobedience was an entirely reasonable reaction. Yet my rebellion never strayed far from the path of a radical ancestor.

5.30 am. A quiet residential street Dark sleeping houses. Soft rain. Everything is still.

We’re parked, waiting for the word to go. It’s tense and I’m nervous. Weeks of planning are building to this moment. It’s not so much the thought of being arrested as the fear of failure. What if the police are waiting for us? What if private security know something’s up from one too many recce visits?

Messages ping from other groups waiting in nearby similar streets. We go through last minute checks. A last snack. Switch off phones. Check for the bust cards and chain locks.

5.50am. It’s time to move. Dozens of figures silently flit through the streets.  Suddenly, there’s our target. The sleek new offices of Ineos. Next to it, Grangemouth Refinery smokes and glows and hums in total indifference to the unfolding drama.

Safely blockading an A-road in the dark with oil barrels and boats is not as easy as it sounds. It was fifteen minutes of adrenaline, chaos, fumbling at ropes, cursing, oil tankers bearing down on you, enraged drivers threatening to drive through banners, deescalators working at full stretch, abuse and horns harsh in the early morning darkness. Our embedded journalist described it as masterful planning. I’d say it was good planning that needed a bit of luck.

It was done. The blockade of Ineos, Scotland’s carbon emitting, tax avoiding, plastic polluting number one climate villain had begun.

I wonder what the Admiral Thomas Cochrane, looking across the Firth of Forth from Culross Abbey House where he spent much of his early life, would have thought watching this colourful act of civil disobedience blooming in the early morning gloom. The colourful flags, the bright orange boiler suits, the fancy-dress pirates giving Ineos the Black Mark for an online audience, the hi-vis of the lines of the police, the Blue Rebels moving through a grey post-industrial landscape to stare mournfully into the souls of policemen. (Oh those Blue Rebels, how they conjure up a paralysis of emotion, a link to grief and sadness but in a wonderful messy this is life and there is no other way.) 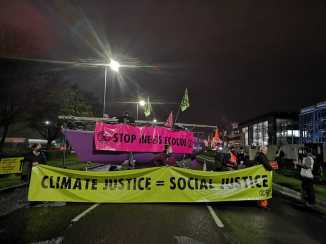 The Admiral, Napolean’s sea wolf, a red-haired Scottish whirlwind of brilliance and calculated recklessness bordering on madness would have scoffed at the lot of us. He would have sailed across the Forth, strapped a barrel of gunpowder to those polluting spires, and threatened to blow up half of East Scotland if the plant wasn’t shut down immediately.

This isn’t speculation. In 1810, he once threatened to blow-up half of Piccadilly in support of radical riots taking place in London at the time. It was a dangerous moment for the authorities with running skirmishes involving troops and protestors. A mob surrounded the house of radical MP Sir Francis Burdett to prevent his arrest. The Admiral, to the delight of the crowd, arrived in a coach and rolled a barrel of gunpowder into Burdett’s house. He knocked out holes into the walls, laid charges and threatened to blow it all up if the house was raided. His threats had an unintended effect. Burdett and the other leaders took one look at the insane situation Cochrane had put them in, and gave themselves up.

In doing so, they saved the Admiral. If he had carried out his threat he would either have had to overthrow the government or he would have gone to the gallows. Instead, his greatest exploits lay ahead of him in South America.

The Admiral is part of history and literature but he is less well-known for his radical politics as an MP for Westminster. He was a visionary radical who inspired London riots in his name and was at constant loggerheads with the establishment. A scourge of naval corruption and vested interests, he campaigned for the pay and conditions of ordinary seamen and for the good treatment of foreign prisoners of war. He was one of the first parliamentarians to argue for universal suffrage.

Rewind a few months to Extinction Rebellion’s October Rebellion. A sunny day in London. A hundred metres away from where the Admiral is buried in Westminster Abbey, a fellow Scottish rebel is about to get arrested. The samba drums are rolling and thundering all around D, as he lies on the road, being read his rights by the police. This is mass civil disobedience on the streets, playing cat and mouse games with the police, leading decoy marches. Frantic ever unrealistic ideas to break through the police lines and stop the Prime Minister getting to Parliament. If you show, the rebellion finds you. One minute I’m a pressganged clueless legal observer, the next I’m holding up a banner leading a march, or waiting outside a police station to greet released arrestees as the city sloughs off its night time attire in the blue-grey dawn.

I share cake with Somerset grandmothers furious at the world they are bequeathing to their grandchildren. On any other issue they seem to be the type who would be solid blue old world Tories. Christian rebels sit on the road quietly reading books and waiting for arrest without any fuss. HS2 tree protestors scale the trees of Parliament Square – they are young and fearless as they swing about the branches hauling kit around and preparing for a long stretch. Some of them were still there weeks later.

In Tufton Street, that beautiful old back street sullied by dark arts lobbying groups and climate-deny funding, the writers are giving speeches whilst in the next street, outside the Home Office, a specialised police team are trying to extricate rebels intricately chained together via a massive tree trunk.

When I’m back on the train north a few days later, the silence is unreal. No helicopters overhead, no flashing blue lights of police convoys screaming through the Westminster streets, no samba, no harmony singing, no chanting, no abuse. 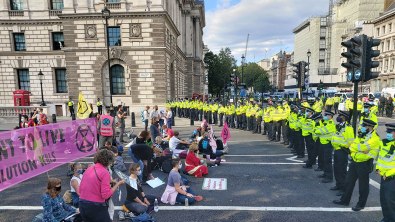 Oh the abuse. There is plenty of support, at the Ineos blockade we were surprised to hear from locals about how much Ineos shaft the local communities, let alone all their climate crimes, but there’s also abuse, online and in your face. You wouldn’t have thought that people trying to save the planet would receive such hatred and this is nothing compared to the violence and loathing suffered by the suffragettes when they protested for a vote.

Movements, protests and beliefs like #metoo, Extinction Rebellion, Black Lives Matter or veganism are hated, feared and abused because they hold up a mirror to our society. They are discomforting, an unwelcome challenge.  (The psychology underpinning status quo reactions and troll abuse is fascinating).

Whatever you may think of Extinction Rebellion, they are merely the canaries sounding the alarm for the unavoidable truth of a catastrophe unfolding all around us. Silencing the messengers won’t make any difference. If years of petitions, polite requests and warnings from scientists have not worked, where do you go from here?

You feel the Admiral would approve, even if none of us are rolling gunpowder into place. I imagine he would like his oceans to be plastic-free and his navigation to be unaffected by climate change. He faced ridicule, abuse, exile and imprisonment yet in the end, he was proved right. So were the Chartists, the suffragettes, the illegal trade union activities that helped bring about the weekend and holidays, the Kinder Scout mass trespassers who gave us today’s national parks, and so many others.

We should look at our legacy through the eyes of our grandchildren and appreciate the benefits past actions bequeathed to us all, no matter where we sit on social and political divides. Maybe one day Extinction Rebellion will join that historic roll call.