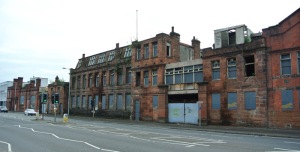 Behind a ramshackled row of abandoned buildings lie a warren of cavernous chambers and galleries of graffiti art.

The cathedral-like halls are full of light and colour from graffiti and paint peeling away to reveal the brickwork. In contrast there are also dark, gloomy rooms and treacherous Stygian corridors full of rotting rubble, dusty furniture, musty smells and masonry.

These abandoned zones set-up a siren call for those who want to hear it, especially the graffiti artists wandering in with huge walls, space and time to fine-tune their skills. The finished pieces will no doubt  go on websites and into scrapbooks but it’s a labour of love, they will be seen by few people. This place apparently used to hold illegal raves, a great space with the added bonus of trains clattering by on the suburban line. This must have happened some time ago when the building was in far better condition. Now you suspect that when the beat kicks-in it really will bring the roof down. 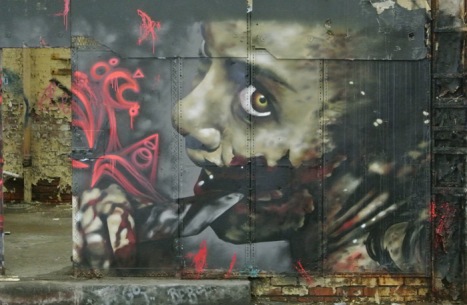 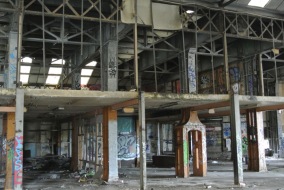 The buildings are stripped back to their “molecular level” as one of my companions puts it. Wandering through the echoing spaces there are still the occasional entrails of the buildings spilling out and the remains of industrial machinery that once help strip and repair cars.

There are inaccessible mezzanines floors hanging from the walls, rust from dripping waters and the charred print of arson attempts.

There are touches of puzzling comedy. In a leafy corner of the site there is a table and chairs, as if arranged by someone for tea and rest where they can watch the trains go by. How and why is there a row of chairs balanced high-up along the pipes? Why is there always one enigmatic shoe in these places, asking so many questions?

There are the more disturbing things. A pit covered with freshly-laid concrete (maybe an answer to what happened to the owner who left behind a shoe) while a pool of the blackest water hides secrets in its fetid depths. 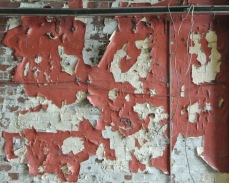 Graffiti art in an abandoned factory 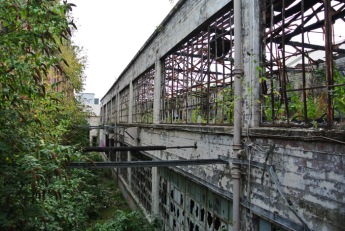 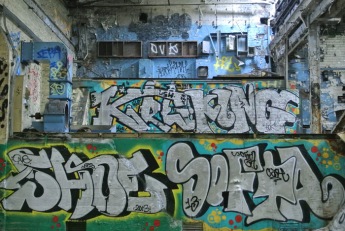 Then there is the more thoughtful. Someone has written on a piece of cardboard a quote derived from Apocalypse Now.

“For there is a conflict in every man’s heart and good does not always triumph.”

“In this war, things get confused out there—power, ideals, the old morality, and practical military necessity . . . because there’s a conflict in every human heart between the rational and the irrational, between good and evil. And good does not always triumph.” 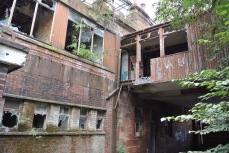 This is hardly Kurtz territory but you can imagine gangsters running their business amongst the old warehouses and outbuildings, undisturbed and beyond the rule of law.

The Glasgow Chronicler emails me the next day (my other companions were visiting guests intrigued and curious to see another side to the city).

“Let’s go back,” he implores, a new obsession born to ghost through a veil of the city and wander it’s lost and sealed spaces.

Great photos from an explore of this space in 2009.